We welcomed couple Lee and John as they booked into the one bedroom apartment.

They had discovered the back block of town. I know and love this neighbourhood. It is home to a faultlessly friendly bunch of brewers, growers and foodies who have made the most of the quiet and pristine area that was once off the radar of visitors. It has become an area favoured by the locals and now it seems that visitors are discovering the magic too.

At Lake Wanaka Managed Accommodation, we greet every guest upon their arrival. We often do cross paths at the apartments or around town as they explore the beauty of a stay in Wanaka. When I inquired where they had been and what was on their list to see and do they simply said “You’d be silly to think all the beauty in Wanaka resides on the lakefront.”

Their journey around the back block:

They started off on bikes with the first stop for lunch and coffee at Florence’s Café. It is famously known for its fantastic coffee, arguably the best in town, and great cabinet food as well as a simple blackboard menu. Once they were fed and watered, they were back on their bikes. They only needed to turn left onto Orchard Road and left again onto Riverbank road and they arrived at their next stop. Aitkens Foley is a family owned and run vineyard on the edge of town with a tasting room and door sales. They sampled the wines, their favourite being the Pinot Gris. This was the perfect place to pick a favourite bottle to take home. Once they moved on, they headed back towards town down Ballantyne Rd. Johns choice was to stop at Groundup Brewing on Gordon Rd.

Wow, a line-up of 22 taps all brewed on the premises with plenty of other choices for Lee the non-beer drinker. She loved the cider. This ideal bar with both indoor (in the brewery ) and outdoor seating, was a perfect choice. John was delighted to find the brewer serving him and talking all things beer. In fact, he later discovered there is also another brew bar further down the street. Gordon road is also known for its various food trucks with Burrito Craft a favourite.

After the breweries, they popped into Janet Brown’s homewares store around the corner which is alongside Metalworks, full of all sorts of curiosities and art pieces. Their last stop that day was Maude wines for a late afternoon tasting accompanied by a platter. They had booked a table for dinner at Lipsky and Son which is right back where they started next to Florence’s Café.

They certainly confirmed they had been to two of best eateries in town, had the wine that had been grown literally in the backyard and the best beer ever brewed in the town by locals for locals. 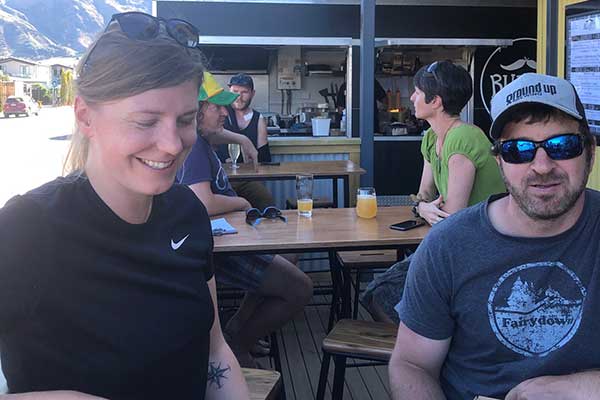